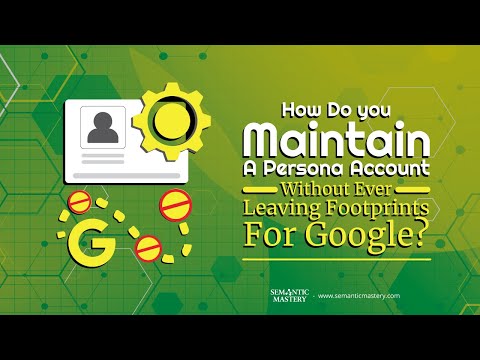 In episode 222 of Semantic Mastery's weekly Hump Day Hangouts, one participant asked how to maintain a persona account without ever leaving footprints for Google.

Hey Guys! Marco made a comment a month or so ago that has been gnawing at me ever since. Ha! So the idea is that we maintain a firewall between us as individuals and the persona accounts we create in setting up all of our Google/GMB accounts. Marco said essentially, that it's better in Google's eyes to be a giver instead of a taker by buying Google services such as upgrading to G-Suite Accounts, etc.. How does a Google “”persona”” do that and still maintain the firewall between “”me”” and the “”persona”” account? If I pay for those services using “”my”” credit card, then the firewall is broken and the footprint connection is made for Google to see. How are you paying for Google Services for “”persona”” accounts and still maintaining the firewall, or is this an exception to the rule? Thanks again! You guys rock!