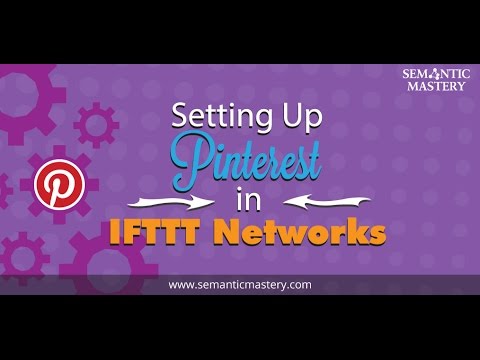 One of the participants at Episode 56 of Hump Day Hangout suggested the addition of Pinterest into the existing IFTTT Network of Semantic Mastery. Find out what the team has to say about it:

Hello! I'm new to IFTTT and only been doing this stuff for 3 weeks. I've already set up a few recipes but I don't see Pinterest in your list??

I created my own Pinterest recipe (yeah, this stuff is addictive!) but the images are not posting properly on my Pinterest board.

For example, if you look at the Pinterest account you will notice that some pins had images posted to them and some not:

For the pins that DO have an image that was posted on Pinterest, you will notice that it was NOT the featured image that was pulled from the blog post, but rather the image embedded into the post:

For the rest of the posts they only have a featured image, ie, only one image and no additional images embedded in the blog post itself.

Is this a clue as to what's happening? Or did I setup the IFTTT recipe incorrectly?

I wonder if I am missing something in the IFTTT setup. I have attached an image of the IFTTT receipt for Pinterest.

Any assistance from the group is appreciated!!!?